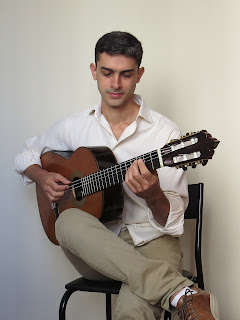 Son of multi-instrumentalist Egberto Gismonti, guitarist and composer Alexandre Gismonti has been playing along his father in international tours since 1997. In 2009, he recorded his first album with Egberto ("Saudações") by the renowned German record label ECM. In 2010, he released his first solo album ("Baião de Domingo"), which has been nominated to the major Brazilian Music Award in the "revelation" category.

The music of Alexandre was selected by festivals "Guarulhos instrumental" (São Paulo, Brazil, 2007), "Casa do Gílson Festival" (Belém, Brazil, 2007) and "World Guitar Competition" (Novi Sad, Serbia, 2012) including his works "Sapateado", "Que surpresa!" and "Na pressão ". In 2012 and 2013, Alexandre was contemplated by the "Projeto Novas" (Rio de Janeiro) with the publication and recording of two works of his own for solo guitar: "Estrada do Sul" and "Subindo no Coqueiro". In 2015, he won the first prize at the Mec and National Radio Music Festival with his composition "Na Pressão", which was performed by guitar duo a Zero (formed by brazilian guitarists Alexandre Gismonti and Jean Charnaux).

As an arranger, Alexandre worked for the composer Lourdes Ábido ("Golfinho Gaivota" album) released in 1997 with the interpretation of the singer Jane Duboc. In 2015, he was the official arranger of the album "Terra Brasilis" by the Brazilian-born soprano based in Italy, Isabel Barbosa.

As an interpreter, Alexandre was included in the list of the best brazilian musicians by the selected for the "7th VISA Brazilian Music Award" in instrumental category (São Paulo, Brazil, 2004).

Alexandre also works as a teacher, with lectures and workshops ministered in Brazil and abroad. In 2009, he taught the course "Ritmos Brasileiros" at the Usina de Arte João Donato (Rio Branco, Brazil), setting up the same workshop in Rio de Janeiro as a fixed core in the Empresa de Pesquisa Enrgética (EPE) during a year. With great acceptance, he also took the workshop to the United States, teaching at the California Brazil Camp (Cazadero / California) and at the University of Milwaukee (Milwaukee / Wisconsin), both in 2011. In 2015, he taught the workshop "Modalismo da Música Brasileira" at the Federal University of Rio de Janeiro state (UNIRIO), in 2016, served as a panelist for the 1st National Guitar Congress (São Jão Del Rey, Brazil) and, in 2018, taught the workshops "Ritmos brasileiros para violão" and "Composição e arranjo para violão" at the 35ª Oficina de Música de Curitiba.

Alexandre also works as a researcher, having been a scholarship holder from CNPq (SR2-CEPG) from 2002 to 2003 with the Research Project "Harmonic and Functional Structuring in Brazilian Popular Music". In 2017, his dissertation "The Polyrhythm in the Guitar: An Investigation through 6 pieces by Egberto Gismonti" got approved by the postgraduate Program of the Federal University of Rio de Janeiro (UFRJ), from which he obtaining the title of Master in performance. He is currently attending a doctorate course at Federal University of Minas Gerais, Brazil (UFMG).